Xander: "You gotta take care of the egg. It's a baby. You gotta keep it safe and teach it Christian values."
Willow Rosenberg: "My egg is Jewish."
Xander: "Then teach it that dreidel song 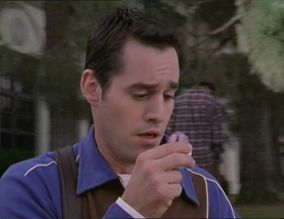 Buffy and her mother, Joyce, are at a mall discussing Buffy's desire to buy a revealing dress. Joyce and Buffy split up to each do an important errand before the mall closes. On her way to the store, Buffy sees a guy wearing a cowboy hat romancing a girl, but also notices he has no reflection in a nearby mirror. She follows him upstairs, scares the girl off, and fights with him until he runs away. She returns to her mom, but forgot about her errand, frustrating her mother, who then gives Buffy a lecture on responsibility. Joyce thinks Buffy only thinks about boys and clothes. A chagrined Buffy tells her mom that she also thinks about saving the world from vampires, which causes her mother to sigh with exasperation.

The next day, Cordelia and Xander are making out in a closet, fighting all the while. Xander says it will work better if she doesn't talk, and she says it will go better if they keep the light off. Each gets offended that the other doesn't want to see or hear them. Cordy mentions (again) that she doesn't want anyone to know about their relationship, and their tempers cause them to start to leave. They reach for the doorknob, but stop and go back to making out with each other. They fall to the floor and Cordelia reaches up to turn the light off. Later that day in health class, the teacher asks the students to list negative consequences of having sex, and Xander and Cordy list each other's potential faults as consequences, without naming names. Finally, Willow gives the intended answer — pregnancy — and Mr. Whitmore says to learn about parenthood, the students will pair off and each team will take care of an egg as if it is their baby.

Xander and Willow enter the library with their eggs. Buffy, who had skipped health class, is handed an egg ("As a punishment, it's a little abstract...") that she will have to take care of as a single mother. Giles looks up the cowboys —Lyle and Tector Gorch — and suggests Buffy should hunt them with Angel's help. Willow scoffs that there will be little actual hunting going on in such a scenario, but Buffy says they'd never slack off their duty to get lost in romance. However, that night Buffy and Angel make out in the cemetery instead of hunting. The Gorch brothers watch from the cemetery wall, commenting that Buffy wasn't doing much slaying with Angel. That night, while Buffy is sleeping, her egg breaks open and tentacles emerge and attach themselves to Buffy's face.

The next morning when she wakes up, the egg is back to normal, and Buffy is grumpy at breakfast. Back at the library, Giles finds Buffy, Willow, and Xander, who have been excused from Health class because their teacher did not show. Willow and Buffy are tired and sit down on the stairs. Xander begins to toss his egg nonchalantly in the air, as worried looks cross Buffy and Willow's faces. He hits the egg and it goes crashing to the ground, but doesn't break. He then reveals that he hard boiled it. Giles suggests that Buffy should go back to hunting with Angel since last night was a bust. That night, Buffy and Angel are yet again kissing instead of hunting in the cemetery. They stop to talk and the subject of the future, and children, comes up. Angel reveals that he can't have children. Buffy is shocked but that doesn't change how she feels for him—she says when she looks to the future, she only sees him.

Back at school, the night watchman hears some noise and goes to find out what the source was. He finds a big hole in one of the air pipes in a closet. When he goes to investigate, he is pushed in through the hole by someone whose face is not seen.

Late that night, Buffy sneaks back in through her window and sees her egg is moving. She gets closer and the creature inside leaps at her face, then drops and scuttles under the bed. She uses an iron as a mirror to look around and sees nothing. It crawls on the floor some more. She grabs some scissors and stands waiting for it to show itself. It climbs the wall behind her and she kills it with the scissors, stabbing it again and again and again. Buffy calls Willow to warn her, but Willow's egg has already hatched. Buffy's mom then comes in, and sees she is dressed. Buffy is grounded and sentenced to no after-school activities, and to only go to the library until her mother picks her up.

The next day at school, Willow tries to convince Buffy that her egg must have been a trap set by the cowboys. As they walk, the camera shows the little creature from the egg is hooked to Willow's spine. Xander, hungry, decides to eat his egg. He cracks it open, and when he is about to eat it, screams when he sees the creature inside. In the science lab the gang debates dissecting the creatures. Willow volunteers, and moments later, Cordelia's egg wakes up from inside her backpack. She suddenly picks up a rod and hits Buffy across the face with it. Willow grabs a microscope and hits Xander. They are thrown into a closet. Then Willow and the others are seen grabbing hoes and pickaxes.

Mrs. Summers comes to school to pick up Buffy, and finds herself having a conversation with Giles about Buffy and children in general. Then she is turned into a host by him when he picks up a creature and puts on her back. The two head down to the basement where they begin their work for the mother Bezoar. Buffy and Xander wake up and find two eggs by their side. Buffy smashes them and they head to the library in search of Giles. They find that Giles has been turned into one of these creatures. Just as they begin to find information, Jonathan cries out in pain in the hall. They rush out only to find that he has been turned into a host. They follow and find everyone digging at and pulling eggs from the mother Bezoar. Xander pretends to be a host, while Buffy fends off the Gorches. She hits them several times and then is thrown into the working pit.

Xander follows Cordelia and another guy. As they walk down a tunnel, he smashes the guy's head into the wall. Cordelia stops to swing at him and he ducks. She then hits him right on his bump. He screams in pain and then hits her across the face. Lyle follows Buffy into the basement area where the two attract attention to themselves, and Willow gives orders to have them all killed. Everyone attacks them, but Buffy and Lyle manage to fight them off. Tector stumbles through the hole now that he's collected himself, and is drawn to the mother creature, who grabs him and sucks him in. Lyle blames Buffy for what happened to his brother and throws her to the ground. Joyce takes a swing at her with a pickaxe, and Buffy quickly dodges before she is pulled towards the mother after; luckily, Buffy manages to grab the pickaxe Joyce dropped on the way. She beats up the mother creature and then all the workers fall to the ground.

Buffy comes up and out of the creature covered in black goo, and Lyle runs off after saying "It's over" (referring to his sentiment after their first fight). The next scene shows all the students leaving. Giles explains that it was a gas leak, which Xander tells him to stick with as a cover story while also urging Giles to wait until the next day, when he fills Giles in on what really happened. Buffy finds her mother, who is upset that Buffy had not studied in the library as she was instructed. As a result, Buffy is confined to her room as punishment; however, it immediately cuts to Buffy kissing Angel. While it looks like they're outside, the camera slowly pans out to reveal Buffy is leaning through her bedroom window, claiming that "she's not breaking any rules." Cut to credits.