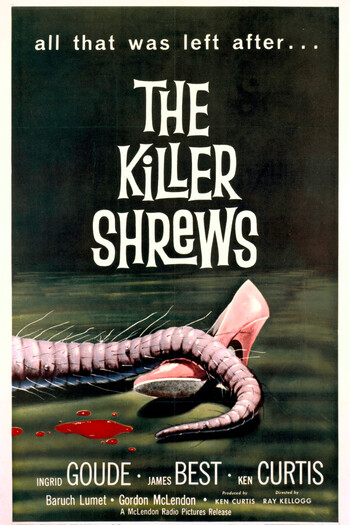 A low-budget 1959 monster movie, directed by Ray Kellogg (who shot it in Texas back-to-back with The Giant Gila Monster) and starring James "Rosco P. Coltrane" Best.

Thorne Sherman is the captain of a small supply boat sent to bring provisions to a lab on an isolated island. When he arrives, inclement weather prevents the offloading of provisions, and he finds the resident scientists — Dr. Marlowe Cragis, research assistant Radford Baines, Marlowe's daughter Anne Cragis, Anne's (former) fiancee and lab assist Jerry Farrel, and a Mexican servant named Mario — nervously awaiting him with guns. Much conversation and beating around the bush ensues, until finally the truth comes out: The scientists have been performing experiments on overpopulation by genetically engineering shrews which grow to the size of sheep dogs, eat incessantly and breed profusely. These giant shrews have escaped and are overrunning the island, stripping it of food until the monsters must turn on the humans, trapping them in the small house/lab.

Unfortunately for the humans, the rains are weakening the house's adobe walls, allowing the Killer Shrews to burrow their way in. Although only a couple shrews actually make it inside, it's enough to kill Mario and Radford; the shrews also gobble up Thorne's sidekick Rook whilst he's attempting to bring items ashore from the boat. Realizing they can't stay in the house because the shrews are getting in, but can't go out of the house because the shrews are out there, Thorne gets creative and builds a portable tank out of empty oil drums. He and the Cragises all escape to the beach in this tank and finally ditch into the ocean and swim out to Thorne's boat (now safe, since shrews can't swim); but Jerry panics and refuses to join them in their escape, and so gets himself eaten. The shrews are left trapped on the island, where it is assumed they will eventually starve and die off.

After decades of making jokes about doing it, Best starred in a 2012 sequel The Return of the Killer Shrews alongside Bruce Davison and his Dukes of Hazzard-costars John Schneider and Rick Hurst.