Film / King of the Zombies 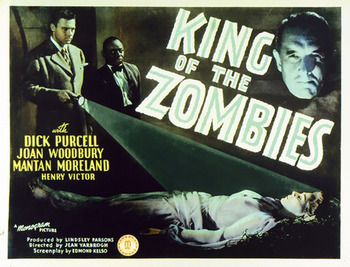 King of the Zombies is a 1941 American horror comedy film directed by Jean Yarbrough and stars Dick Purcell, Joan Woodbury, and Mantan Moreland.

Set in the Caribbean shortly before the U.S. was drawn into WWII, this zombie chiller tells the tale of an American special agent who, along with his valet and a pilot, is sent out to find a missing American Admiral, whose plane crashed on one of the islands. Unfortunately, the hero's plane also crashes. Fortunately, a suave but sinister German doctor with a very strange wife is there to help them. The doctor explains that his spouse is in a strange trance and he is trying to find a cure. The valet soon discovers that she is not the only one; the island is teeming with zombies. When the valet tries to tell his employer, the employer refuses to believe in "voodoo hocus pocus." The valet and the pilot find themselves entranced. Fortunately, the agent is still around to solve the mystery of the zombies and to confront the culprit, an enemy spy.

King of the Zombies was nomimated for a Academy Award for Best Music (Music Score of a Dramatic Picture).

King of the Zombies contains examples of: