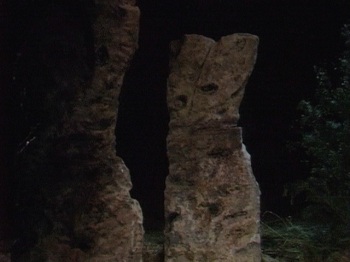 "Oh look, rocks!"
Professor Rumford: Are you from outer space?
The Doctor: No, I'm more from what you'd call "inner time".
Advertisement:

The one with malevolent sparkles.

Written by David Fisher. This four-episode serial first aired from October 28 to November 18, 1978.

The search for the Key To Time takes the Doctor, Romana and K-9 to present-day (well, 1970s) Earth, where the Tracer leads them to a group of standing stones on Boscome Moor. The third segment is nowhere to be found, and the travellers instead meet the elderly Professor Amelia Rumford and her live-in assistant Vivien Fay, who tell them that the site has had a varying number of stones over the years.

Then the inevitable campy druids show up and nearly sacrifice the Doctor, before it is revealed that the stones themselves are sentient — a lifeform called Ogri who feed on blood. One of the Ogri kills the head druid and it is revealed that Vivien Fay is in fact the Cailleach, a being worshipped by the druids, having taken on human form after being on Earth for four thousand years. Fay transports Romana to a spaceship hidden in hyperspace at the circle, and the Doctor follows.

Accidentally releasing two justice robots, the Doctor is sentenced to death. He takes a lawyer wig out of his pocket and instead begins a magnificent bit of Bothering by the Book. He manages to knock Fay unconscious by touching her just as he is supposed to be electrocuted, which legally allows the sparkly justice robots (called Megara) to read her mind, seeing as she can't speak for herself anymore. The Megara quickly notice that Fay is in fact Cessair of Diplos, the criminal they've actually been sent to try. She stole a few Ogri from a nearby planet and employed them on Earth as her bodyguards while avoiding the interstellar police for four thousand years. They transform her into the final stone in the circle, but not before the Doctor has snagged her necklace — the segment of the Key that he has been looking for.