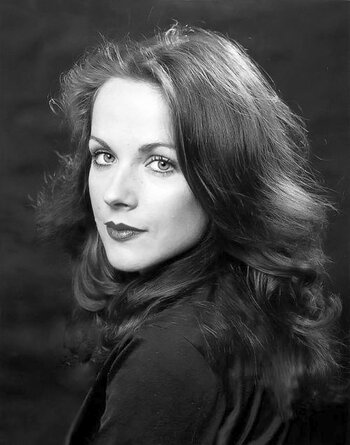 Mary Tamm (22 March 1950 – 24 July 2012) was an English actress of Estonian parentage. She is best remembered for playing the first incarnation of Time Lady and companion Romana on Doctor Who from 1978-79, alongside Tom Baker's Fourth Doctor.
Advertisement:

She was cast in the role of Romana at the start of Season 16 of Classic Doctor Who, playing a new kind of companion; the first to be the Doctor's true intellectual equal. She left the show after one season due to dissatisfaction with the writing of her character, whom she felt had devolved into a generic "screaming companion".

Her final story, "The Armageddon Factor", did not feature any departure scene for her character, as she had not made a firm decision on whether to stay or leave when filming wrapped, and producer Graham Williams, who had been trying hard to persuade her to stay on, opted to proceed as if she was going to do so. As a result, the first story of the next season began with Lalla Ward, who had appeared as a guest character in Tamm's final story, as a newly regenerated Romana.

Tamm reprised her role as Romana for Big Finish Doctor Who from 2005 onwards. Initially her appearances were confined to Companion Chronicles and the "Audioplay/Gallifrey" series, but shortly before her death in 2012, she recorded a set of Fourth Doctor Adventures alongside Tom Baker, who had finally agreed to work with Big Finish after years of refusing. They were released posthumously in 2013.

Her roles in works with TV Tropes pages: