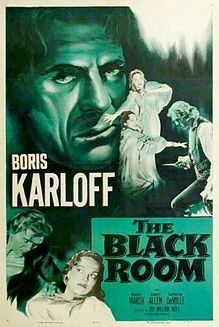 "Embraced by the Devil Monster... his kiss the password to oblivion!"
Advertisement:

The Black Room is a 1935 horror film starring Boris Karloff.

Anton de Berghman is a noble prophesied to kill his twin brother. After returning home for the first time in years, he finds the barony in revolt. You see, his brother Gregor is a cruel sociopath, ruling the barony with an insane bloodlust. Eventually, Gregor kills Anton and steals his identity, not knowing that the prophecy could still come true...