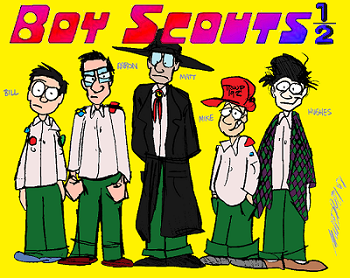 A dog, a duck, a woman, a squirrel, and a cat.
Advertisement:

note  (pronounced, Boy Scouts One Half) is a fan fiction series, set in the same universe as Takahashi Rumiko's Ranma ½, which follows an entirely original group of characters who are Boy Scouts living in Massachusetts, some of whom are a group of Self Inserted characters. After a trip to China, five of the members of Troop 192 find themselves suffering curses from the same training ground of cursed springs that some of the Ranma ½ characters had once visited.

The series has, unusually for fan fiction, spawned a franchise consisting of three spin-offs and a sequel. The components of "The Boy Scouts ½ Universe" are:

And Tropes Specific To the Spin-offs Or the Sequel:

The Perspectives Series
Kenny's Laboratory
Boy Scouts ½ in Japan
To Conquer the World
"Shut up, Troper!"