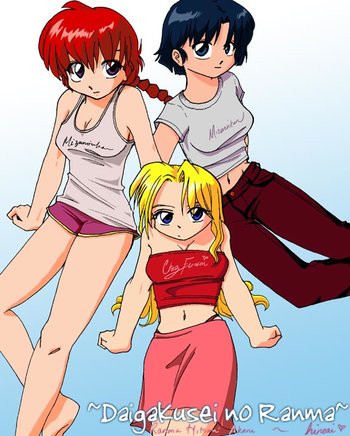 From left, Ranma-chan, Hitomi and Akane
Their relationship has been a volatile one.
She, a boy-hating tomboy.
He, a martial artist cursed to be an aquatranssexual.
Engaged against their will, they learned to tolerate each other.
Now, their relationship is moving on to the next level.
They must learn not only to cope with their new relationship, but with college.
Her name is Akane Tendo. His is Ranma Saotome.
This is their story.
Advertisement:

Daigakusei no Ranma is a Ranma ½ fanfiction.

What happens when Nerima's resident aquatranssexual martial artist goes to college? And what if he and Akane Tendo finally tie the knot in an impromptu wedding organized by their parents?

Written by David Tai and Paul Gallegos, it follows Ranma Saotome and Akane Tendo as they attend Mizunoikan University, both as college students and as a married couple.

Plenty of hilarity (and violence) shall ensue as they venture through college life, as well as learning how to cope with one another.

The story also had a spin-off called Daigakusei no Ukyo (College Student Ukyou), which details Ukyou's own experiences as a college student at Mizunoikan.

Daigakusei no Ranma have the following tropes: