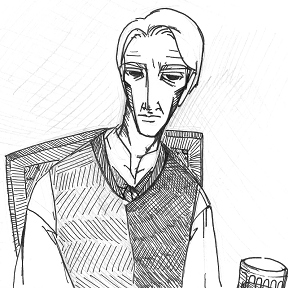 A Kink Meme-inspired Fusion Fic by Megan Phntm Grl with the characters of Watchmen in a rather loose adaptation of Dracula.

Daniel Dreiberg, a young solicitor for Mr. Mason's legal firm in New York, voyages to Transylvania to oversee the purchase of Carnac Abbey by its mysterious owner, the Count Adrian Veidt. The Count's apparently poor health and advanced age lead Dreiberg to offer to stay as his companion until the Count is fit to travel. Meanwhile, in New York, former actress and Daniel's fiancee Laurel Juspeczyk learns that her mother's onetime fellow actor Byron Lewis has been confined to a sanatorium run by Laurel's ex-flame Dr. Osterman and is now eating moths and rambling on about an entity he refers to as his master. Daniel discovers that his new friend is not all that he appears to be, but Veidt already has a very specific plan in New York involving Daniel's fiancee...

. The author considers this her Halloween present to the Watchmen fandom, so to speak.