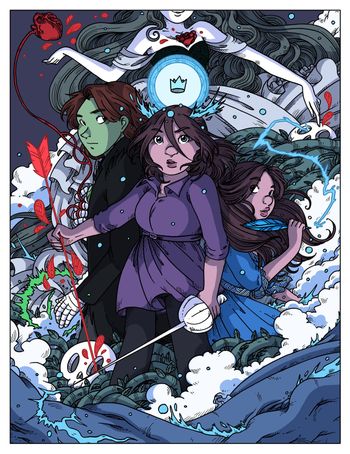 Going down the rabbit hole and beyond.
Oz? Like Australia? Wait... the road is yellow. Oh HELL no.
— Emma Crewe, Chapter 2
Advertisement:

is the story of Emma Crewe, a woman who discovers she can visit other worlds. She finds out that these are places she already knows – fantasy and fairy lands made famous through the spoken word, literature and cinema. Her power as a Namesake forces her to act as a protagonist in these familiar stories as she figures out how to get home.

But as she travels, she discovers that those controlling her story have their own selfish goals in mind – and her fate is the key to everyone’s happy ending.

The comic is chock full of fairy tale references ranging from the obvious to the obscure. Now has a Character Sheet.