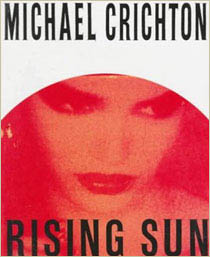 Rising Sun is a 1992 internationally best-selling novel by Michael Crichton about a murder in the Los Angeles headquarters of Nakamoto, a fictional Japanese corporation. The book was published by Alfred A. Knopf. It was adapted into a not-so-warmly received film in 1993 which starred Sean Connery, Wesley Snipes, Harvey Keitel, and Mako.

Although a detective/murder mystery novel at first glance, Rising Sun deals with the controversial subject of Japanese-American relations, and questions the premise that foreign direct investment in the high-technology sectors of the United States is beneficial. Throughout the book, differences between the Japanese and Western mindsets are highlighted, especially in the areas of business strategy and corporate culture.