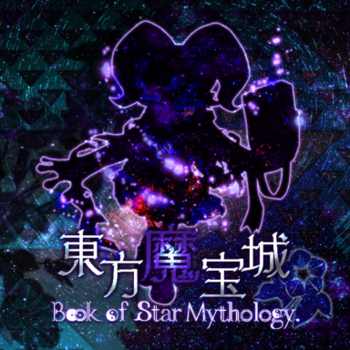 Touhou Mahoujounote "Magic Treasure Castle" ~ Book of Star Mythology is a Touhou Project fangame with a plot written by Milka Oyasu and scripted by Raichu (Of White Names Spoiled Past fame) for the Danmakufu engine. It started life as a collaborative fan album before changing to a full fangame. Its beginnings as a music album resulted in a soundtrack put together by an All-Star Cast that sound insanely epic. It's also a sequel to The Last Comer, Mystical Power Plant, and Riverbed Soul Saver, though unlike the previous games, callbacks are limited to the use of patterns from the previous three games' final boss in the final boss's Last Word.

The game gives you Reimu, Marisa, and Sanae as playable characters and gives you a choice between "Legendary Hero Mode" and "Legacy Mode". "Legendary Hero Mode" is an attempt at recreating Pointdevice Mode from Legacy of Lunatic Kingdom, though due to the difficulty of programming spawn points in Danmakufu, it just gives you infinite lives. Luckily, the game isn't balance around it like LoLK, so players can enjoy Legacy Mode without any worry. The game also introduces a star system. They are dropped by enemies and bosses, and getting closer to the enemy will cause them to bleed out more rapidly. Collecting enough can net you life and bomb pieces at the end of each chapter, as well as unlocking Last Words for each boss. The main game was released on October 14, 2016, while the extra stage patch was released in December of the same year.

The plot involves the Moriya Shrine reinstating the Tanabata from the outdated Lunar Calendar as a new, second Tanabata as an effort to gain more faith, with the common morning glory being used to advertise it. This caused the overwhelming amount of human wishes to become divine spirits and influenced the stars in the sky and reuniting Orihime, Hikoboshi, and the swan (Traditional Japanese names for the constellations Vega, Altair, and Deneb respectively). This opened up the River of Heaven and caused the Summer Triangle that unites the three to shine. A torrential rain then begins to fall, and the three heroines set out to solve the incident.