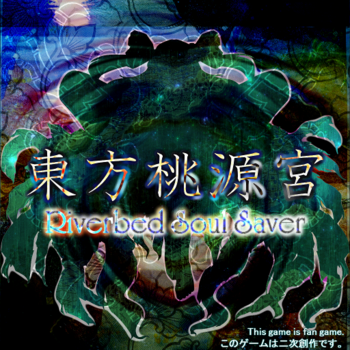 Touhou Tougenkyuunote Shangri-La Palace ~ Riverbed Soul Saver is a Touhou Project fangame whose script was written by Ido and Len. The first demo version was released on March 24, 2014, and the second demo on April 25, 2014, adding Marisa as a playable character. The full version with 6 main stages was released on June 27, 2014 and next major update on September 15, 2014 added an extra stage and Futo as a playable character. The update on January 31, 2015 added a Phantasm Stage and an Overdrive mode. The game is a sequel to The Last Comer and Mystical Power Plant, and thus has some references to them.

After the events of the previous games, there has been an influx of newcomers to Gensokyo. Fearing that the Great Hakurei Barrier will be put under too much stress, Yukari has expanded the interior of the barrier in order to delay new arrivals. Now, a massive amount of something is approaching the barrier, bringing a cold front with it. Reimu, Marisa, and Futo are sent out to the barrier's "Otherworld" to investigate, and deal with it before it becomes a threat.