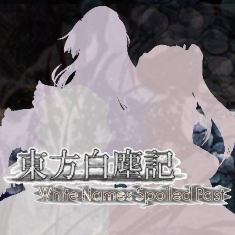 "White Names Spoiled Past" is a Touhou Project fangame developed by several members and associates of the team behind previous fangames The Last Comer and Mystical Power Plant.

One day, Reimu, Marisa, and Sanae discover that the humans of Gensokyo have become unable to form memories. As they separately prepare to investigate the incident, they're each visited by someone claiming to have information on the culprit. One is a Gadgeteer Genius who loves making shady experiments (Tokubi Shourokuzan), a familiar with the ability of granting names and the power of Ret-Gone (Shiragiku Kayano Linne), and an Amnesiac God who manipulates memories (Minayu Okuchiri). They each set off alongside their new companion, and quickly find that the situation is more complicated than it seems.

Amongst the innumerable gods living in Japan, there are more than a few who quarrel rather than getting along. The goddess of plants, Kayano-hime, and the goddess of fire, Atago, often battled each other over various disagreements. And at present, Gensokyo had been chosen as the stage for one of their duels...