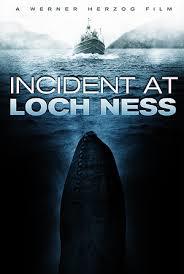 A 2004 Mockumentary written, produced by and starring Werner Herzog and Zak Penn As Themselves, as the director and producer of a fictitious documentary about the Loch Ness Monster called Enigma of Loch Ness. Herzog is interested in the psychological significance of Nessie and other paranormal phenomena, which he believes to be purely imaginary, while Penn just wants to sell movie tickets. Neither has any expectation of encountering an actual monster.

Meanwhile, the film crew are themselves being filmed by a second crew under director John Bailey, who are producing the also-fictitious documentary Herzog in Wonderland, the salvaged pieces of which are then used to make the "actual" documentary Incident at Loch Ness. Essentially a documentary (Enigma) within a documentary (Wonderland) within a mockumentary (Incident). While we're at it, Enigma of Loch Ness was in real life promoted as if it were a real documentary being made by Herzog in 2003.