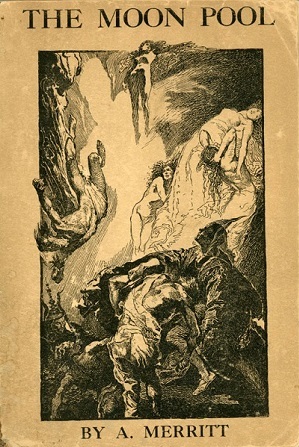 The Moon Pool is a fantasy novel by American writer Abraham Merritt. It originally appeared as two short stories in All-Story Weekly: "The Moon Pool" (1918) and its sequel, "Conquest of the Moon Pool" (1919). These were then reworked into a novel released in 1919. The protagonist, Dr. Goodwin, would later appear in Merritt's second novel The Metal Monster (1920).

One of the earliest examples of the Lost World genre, it tells the tale of Dr. Walter T. Goodwin's adventure in the South Pacific, after he runs into noted anthropologist Dr. Throckmartin aboard a ship. Throckmartin claims his wife and entire expedition were abducted by a mysterious entity while they were investigating ancient ruins of Nan-Matal, in nearby Ponape. After witnessing the entity come to claim Throckmartin as well, and armed with the knowledge he gained from him, Dr. Goodwin prepares an expedition to search for him and find the truth about the “Dweller in the Moon Pool”. Along the way he is joined by a Norse sea captain, Olaf Huldricksson, who has lost his wife and child to the entity; a downed Irish fighter pilot, Larry O'Keefe and, when they reach the site, a villainous Russian scientist, Marakinoff.

Together they penetrate the secret entrance to the Moon Pool and are led to a secret network of caverns deep beneath the earth, where they find an entire world full of wonders and terrors, ancient civilizations and technologies beyond their comprehension, and become embroiled in the affairs of its inhabitants, even as the fate of the entire world hangs in the balance if the power of the Dweller is unleashed upon the unsuspecting surface world.

The Moon Pool contains examples of the following tropes: