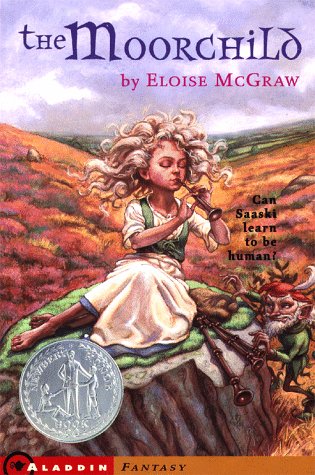 ''"Why, you'll be 'changed, m'dear. We'll swap you for a human child who'll make a good servant to the band. Half-humans never work out 'mongst the Folk. No, Never do."
"But-I'm half Folk too!" Moql swallowed hard, trying to swallow the inescapable next thought. "What if -I never work out -'mongst the humans?"
The Prince, musing, seemed not to hear the question.
"Aye, you're neither one thing nor quite yet t'other," he agreed. "Pity, but there 'tis."''

The Moorchild is a story about a changeling girl (Moql/Saaski), abandoned by the Moorfolk (read: Fair Folk) for being half human, who never quite fits into human society because of her eldritch nature. Her human parents are ridiculed for her strangeness by the intolerant villagers, but take it in stride and do their best to provide for her. She often runs off to play on the Moor, the only place where she feels at peace.