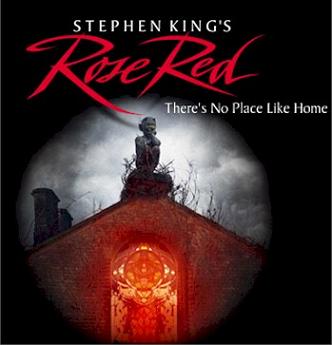 Every house has a story to tell...This one will kill you.
Advertisement:

Rose Red is a three-part Miniseries written by Stephen King. The plot revolves around Rose Red, an abandoned mansion in the middle of Downtown Seattle. The mansion is considered to be haunted, and twenty-three people are rumored to have either died or disappeared either within it or on the grounds by the time the miniseries takes place.

Among the body count are Rose Red's original owners John (John Procaccino) and Ellen Rimbauer (Julia Campbell), their daughter April (Paige Gordon), Ellen's African maid Sukeena (Tsidii Le Loka), Mr. Rimbauer's business partner Douglas Posey (Don Alder), and famous actress Deanna Petrie (Yvonne Sciò). Additionally, the house does not have a set layout and number of floors. (How people do not notice the house shrinking and growing as they drive down the Alaska Way Viaduct is never explained. Presumably the growth aspect of the house is only a Bigger on the Inside ability which doesn't show on the outside.) After tours of Rose Red ceased in the 1970s (with another disappearance), the mansion became "dormant."

The miniseries was followed by a prequel titled The Diary Of Ellen Rimbauer, a tele-movie based on the tie-in novel of the same name. The miniseries aired on January 27, 2002.