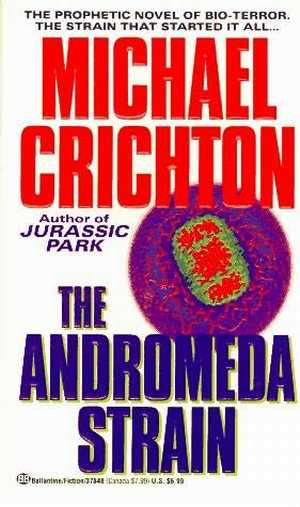 The Andromeda Strain is a 1969 sci-fi thriller novel by Michael Crichton, about a team of scientists who investigate a deadly organism of extraterrestrial origin that causes rapid, fatal blood clotting.

As the novel opens, the microorganism has killed an entire town save for two individuals, an old man and a crying infant. The team races to find the common link between the two survivors before the rapidly mutating organism can find a way out of containment and cause a deadly epidemic. Most of the action takes place in an underground research installation called "Wildfire", located in a remote part of Nevada. A lot of the book and the 1971 movie spend considerable time showing the process the research team has to go through to be decontaminated just to be able to work on the problem.

The novel has been adapted into movie form twice; the 1971 film starred Arthur Hill, James Olson, Kate Reid, and David Wayne and followed the book closely, while the 2008 miniseries is a re-imagining of the original story.

A sequel, appropriately entitled The Andromeda Evolution, was published in 2019, written by Daniel H. Wilson with the assistance of Crichton's estate.