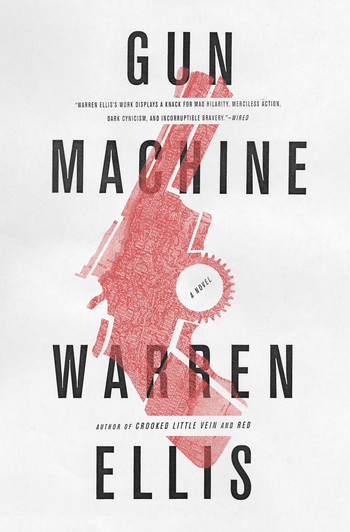 The Tao of cop shows, man. All those cop shows I grew up with, especially those in the aughties, say the same thing. If you are smart enough, and your Science, with a capital S, is good enough, and if you refuse to give up and just keep using Science on the problem, it’ll crack and you can solve it. And the problem is always the same: the world has stopped making sense, and the cops have to use Science to force it to make sense. That’s the heart of every cop show. Give yourself to a cop show for an hour, and it’ll show you a breakdown in the ethical compact, and the process by which that breakdown occurred, and how it is fixed and made to never happen again. That’s why everyone loves them. They speak to our sense that everything’s fucked and then show you how to work to find out what really happened—simplify the world—and then deal with it.

Warren Ellis' second novel, a Police Procedural involving a Mega-Corp, a private security organization and a good amount of Native American mythology. It is told from the perspective of NYPD Detective John Tallow, who, after losing his partner, discovers a ritualistically decorated room full of guns, each of which can be connected to an unsolved murder — over two hundred of them, some dating more than twenty years back.

The novel is also told from the perspective of The Hunter, the serial killer who created the room. He perceives the world around him... a little bit different than normal people.

A TV series is in development.