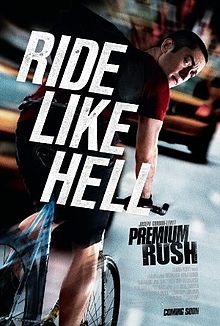 The film follows bicycle messenger Wilee through the streets of Manhattan. During the titular premium rush, Wilee ends up the target of dirty cop Bobby Monday (Michael Shannon) hell-bent on taking the mysterious envelope he is delivering for his own purposes.

An action-thriller with a tongue-in-cheek approach to its admittedly ridiculous premise, Rush wound up being something of an Acclaimed Flop, yet is slowly finding a cult audience.

Tropes appearing in Premium Rush include: