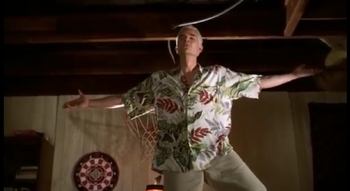 Spike: You want me to tear this place apart, you bloody poof?
Xander: That's it! I am way past through with you! Hate to break it to you, O Impotent One, but you're not the Big Bad any more. You're not even the Kinda Naughty! You're nothing but a waste of space. My space! And as much as I always got a big laugh watching Buffy kick your shiny, white bum, and as much as I know I can give you a little bum-kicking myself right now, I'm here to tell you something... You're not even worth it.
Advertisement:

Buffy and Riley finally talk. As much as Riley wants to tell Buffy who he really is, he can't, but Buffy is able to guess based on the evidence of the past several weeks. Riley is amazed by her talents and abilities, but when she confesses that she's the Slayer, he doesn't know what that is. An earthquake hits; though mild, the memory of the last earthquake in Sunnydale (which was a portent of her death) disturbs Buffy.

As Xander cleans up some of the earthquake damage, he informs Spike that if he's going to live there, he'll have to do some of the housework. Spike gets angry and tries to hit Xander over the head with a wrench while his back is turned, but has to stop due to the pain in his head. Willow checks in with Buffy and informs her of the aftershock party that is taking place in one of the dorm buildings that lost power. Buffy goes to Giles, fearing that the world is going to come to an end, but he dismisses her ideas, telling her that earthquakes are a normal Southern California occurrence. He then changes the subject to tracking down the commandos, telling Buffy that based on their information it seems that the base is below UC Sunnydale and that other students may be involved. Buffy gets very uncomfortable with the topic and tries to discuss the earthquake more, but Giles once again shrugs off her concerns.

Riley pumps Forrest for information on the Slayer, which Forrest thinks is just a myth that monsters made up. In fact, the demons themselves are explained away as being simple animals. A demon goes berserk and attacks Riley and Forrest. They manage to subdue it and wonder at the strange activity their demonic captives have been exhibiting since the earthquake.

At the party, Willow sees Percy, whom she tutored in high school. The girl he is with, Laurie, has a problem with Willow talking to Percy and suggests that they go somewhere else. Meanwhile, a guy mixing drinks in one of the dorm rooms has his throat slit by a large demon. Later, Willow overhears a conversation between Percy and Laurie where Percy calls Willow "captain of the nerd squad" to soothe his girl. Depressed, Willow goes into one of the dorm rooms to lie on a bed, but when the lights come back on, she finds herself next to the body that was mutilated by the demon, who has carved onto the dead boy's chest a pyramid with an eye in the center.

Xander finds Spike wearing Xander's Hawaiian shirt and shorts because he shrunk his own clothes. When Spike tries to get temperamental, Xander quickly loses his temper and tears Spike down verbally, harshly telling him that no one is scared of him anymore and that he's not even worth the effort to pummel, before simply walking away.

Riley shoots baskets with Forrest and broods about Buffy when Graham walks in and tells them about the murder. Riley orders the others to report to Professor Walsh, while he checks the situation out himself.

Willow fills everyone in about the body she found, and about Percy talking bad about her. After she shows everyone the symbol carved into the student's chest, Giles says it is definitely the end of the world again. Buffy hunts down this demon, and finds it at a mausoleum where it's collecting the bones of a small child. She fights with the demon, but it escapes and she runs into Riley. He tries to talk to her, to convince her to give a relationship between them a chance, but because of all the pain in her past, and the problems she's certain it would cause, she tells him no.

Research leads them to find that the demon needs the blood of a man, the bones of a child, and the Word of Valios to perform a ritual called the Sacrifice of Three, which will destroy the world. Riley talks to his team and sends them out to find and kill the demon. Fed up with his pathetic life, Spike tries to kill himself by falling on a stake, but Willow and Xander walk in, distracting him and making him miss the stake. Pitying him, Willow insists that they take him along, and Xander reluctantly agrees, if only to keep Spike from trashing his room any further. Spike, however, is ecstatic over the news that another apocalypse is coming.

Out on patrol, Buffy runs into Riley again and Riley resumes their earlier conversation. He tells Buffy that she needs to be more positive, to not look for the bad in the situation. He tells her he doesn't care about her past and begs her to just take a chance on him, but she continues to refuse. Meanwhile, at the library, Willow and Xander search for the Word of Valios, while an unappreciative Spike cheers himself up by verbally tearing them down, taunting them over Xander's lack of direction and Willow's inability to get Oz to stay, as well as their seeming uselessness to Buffy, insisting that they are merely "groupies" whom Buffy doesn't have the heart to turn away and that Buffy would be a much better Slayer without constantly having to watch out for them. Though Willow and Xander protest his words as being untrue, it's clear that Spike struck a nerve.

Giles discovers that the Word of Valios is actually a talisman that he has in his possession. The demons, however, have already made their way into his apartment and beat him up badly before taking the talisman. The gang find Giles and then head off to the high school after he informs them that the ritual is to open the Hellmouth.

The gang head back to Sunnydale High School, now nothing more than a burnt-out shell. After walking through the black corridors (and stepping around piles of charred "Mayor meat"), the gang makes it to the crater that used to be the library where three demons are performing the ritual. A fight breaks out, and then one of the demons jumps into the Hellmouth, revealing that the demons themselves are the sacrifice for the ritual.

Another demon attacks Spike, and after several hits, he finally hits back. There's no pain in his head, and he realizes he can hurt demons. Ecstatic over this revelation, Spike promptly beats the demon senseless and, caught up in the excitement, throws it into the Hellmouth before being knocked out by falling debris. While the rest of the gang escape the soon-to-be-falling building, Riley shows up to help Buffy fight. The third demon makes its way into the Hellmouth and Buffy goes in after it. Thanks to a cable and hook Riley attached to her belt, Buffy is pulled out of the Hellmouth along with the third demon. The world is saved again.

Afterwards, Riley tries to keep up his secret identity, but Buffy's friends pretty much know who he is by his clothes, while Spike conceals his identity by posing as a "friend of Xander's" with a bad American accent. The next day, Buffy goes to Riley's dorm, where he says how upset he is at himself for allowing her and her friends to find out about him. Telling him that everything will be okay, she kisses him.

Back at Xander's basement, Spike, eager for another brawl, tries to convince Willow and Xander to go out demon hunting rather than sit and watch television, but they are too disturbed by his overly-excited attitude.