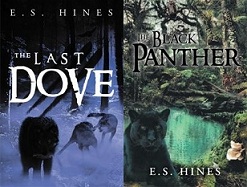 First two books in the Trilogy of Aeir
"The legacy of the white Dove survives in the peace that some clans still hold, but it will not last long. Our neighbors to the west grow restless, and even within Enira, dark forces stir."
Advertisement:

The Trilogy of Aeir is a Young Adult High Fantasy series by Elizabeth Suzanne Hines (E. S. Hines). It is set in Aeir, a land where shapeshifters are more common than humans, but are slowly dying out due to the weakening of their bloodlines. The first two books, though set in the same universe, have different characters and are set in different locations. Both revolve around unusual shapeshifters with connections to Aeir's history.

The Last Dove: Enira, a region encircled by the mountains of Aeir, is home to ferocious warriors and devoted clansmen who all share one special ability - that of the Change. The Change allows them to shed their human form and assume an animal one based on their clan’s heritage. But peace is not theirs; the feuds between clans are becoming steadily more intense, and each clan has their own ambitions for the future of their country.

In this time of impending civil war a girl named Bria, whose own shapeshifting abilities still have yet to manifest, runs away from the cruelty of the village she grew up in. As she travels across Enira she becomes embroiled in a generations-old plot, and discovers secrets about her past and the past of her country that soon force her to decide who to trust - and who to love - even as she becomes the unexpected keystone of a revolution that will affect all of Aeir.

The Black Panther: Cimari's history is rife with magic; the verdant land exists because of the sacrifices of its first settlers. For centuries memory of that sacrifice, and respect for it, kept peace in Aeir's western half.

But the power hungry, as they always do, must rise. Under words of peace, and finally admissions of war, the Tigers swept across Cimari and conquered the other prides one by one. Only the island of Ayari, and the Leopards who guarded its ancient relic, stood against them in their march south.

Generations later a leopard princess, Kaia, was born with the rare all-black coloration that has marked great members of their line for eons. She, at the will of her father, is chosen to invade the Tiger fortress in a way she would never have forseen - a way that would change her life irrevocably, and the outcome of which will determine the fate of her people and all Cimari.