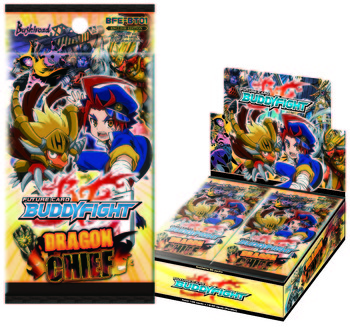 Future Card Buddyfight is a Japanese Collectible Card Game made by Bushiroad, tied-in with the anime of the same name. The game was first released worldwide on January 24, 2014.

Future Card Buddyfight includes six types of cards. All the cards (excluding some Generic cards) belong to a world, and only cards from a single world (barring Generics and a few exceptions) can be used together. These six types of cards are:

In game, both players start with 10 life, and the objective of the game is to reduce the opponent's life to 0. At the start of the game, both players place one flag card and one monster card, known as a Buddy, on their side of the field (these two cards are not considered to be a part of the deck). Players also put two cards from the top of their deck to the gauge zone, a mana analogue that some cards require as a cost. At the start of every turn, players will draw 1 card, put 1 card to the gauge zone, and draw another card. Players can call any amount of monster cards, as long as the sum of the size stat (usually 0-3) of the monsters on the field does not exceed the limit (default 3).

When calling a monster with the same name as the Buddy, the player can perform a Buddy Call (moving the Buddy onto the field and putting the called card into the Buddy Zone; costs are paid normally) and gain 1 life as a result of "Buddy Gift". Buddy Gift is usually the only feature of the Buddy mechanic, though some cards have more interactions with the Buddy mechanic. Players are generally limited to one Buddy Call per game, since it can only be performed when the Buddy is standing (placed vertically), and the new Buddy after the Buddy Call is placed resting (placed horizontally).

In 2020, Bushiroad announced that the entire Buddyfight franchise would be discontinued due to declining sales. The final set of the card game was released in September 15, 2020, with official events and support for the game continuing until June 30, 2021.