Manga / Eagle: The Making of an Asian-American President 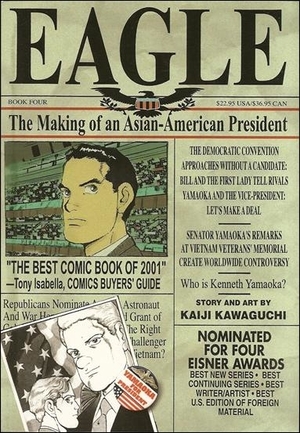 "It's Primary Colors in a really bad mood."
—Warren Ellis

As mild-mannered Japanese newspaper reporter Takashi Jo is mourning his mother's untimely death, he receives an even more shocking announcement: his employer is transferring him to America to report on the presidential campaign of Japanese-American senator Kenneth Yamaoka. The one who requested the transfer? Yamaoka himself.

So begins Takashi's journey into both the complicated and often dangerous world of American politics, and into the murky history of his own family, which may prove even more so...

Eagle: The Making of an Asian-American President by Kaiji Kawaguchi, is both an informative and entertaining look at the American electoral process and a compelling human drama of lies, sex and above all, power.