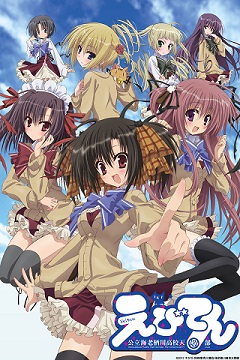 Itsuki Noya is a rich young heir who is just starting his school year at Ebisugawa High School. Always fascinated with the stars, he decides to join the school's Astronomy Club. For some reason, however, the club is housed on the basement, and through confusion of kanji, ends up in the "Astronomical Club", an all-girls' otaku club, filled with such an eclectic cast as loudmouthed president Kyouko Todayama, beleaguered fujoshi Hakata Kanamori, stoic Rikei Hiromatsu, kindhearted vice-president Hasumi Ohba, and their adviser... a cat named Omori. Stuck with them (and in women's clothing), Noya must endure the craziness he has stumbled into. Add to that Kyouko's younger sister Izumiko, who also happens to be Itsuki's personal maid and the incredibly tsundere Student Council President Yuka Iseda, and Itsuki will have the time of his life.

The series is currently streaming on Crunchyroll.