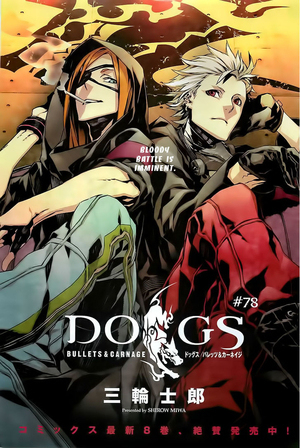 "The dog inside me will not die..."
Advertisement:

Dogs is set in a dystopian, post-apocalyptic setting where it is always winter. Genetic manipulation exists in various forms, from creating attractive child prostitutes to making bizarre weapons. The organisation running the underground world seems to be the cause of a lot of violence and corruption... Including certain events in the main characters' pasts. The trouble is, those characters don't have the whole story. Either they're trying to find who exactly is behind something, or who killed X person, or just what got Y involved in it all. Familial angst is prevalent, as are people who are a lot more involved than they first seem. But whatever their reasons or pasts, they're in it together.

It started off with one volume, titled Dogs: Stray Dogs Howling in the Dark, which introduced the four main characters and gave a little backstory for some of them. Dogs: Hardcore Twins introduced Luki and Noki, two young girls who treat killing as a game. Later on, Dogs: Bullets & Carnage started the main plot aspect, revealing more about the characters, introducing new ones, and dishing it all out with heaps of action.

There's also an OVA, also titled Dogs: Stray Dogs Howling in the Dark, which is based on the original manga.