Podcast / Anime Out Of Context 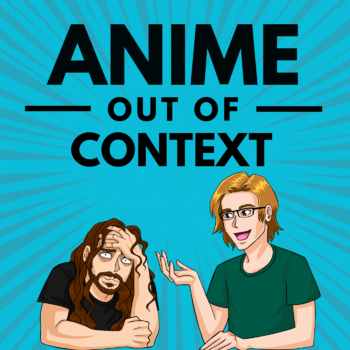 Remington, the victim trying not to lose his sanity as Shaun teaches him about the vast wonders of Anime
Shaun:"Hello, and welcome to Anime out of Context; the show where I explain the sometimes weird, sometimes wonderful, but always hilarious world of anime.
Remington:"And I wonder how I'm still doing this shit!"
A typical show opener

Anime out of Context is a podcast started in 2018 by Shaun Rollins and Remington Chase. Each week, Shaun shows his good buddy Remington an anime to demonstrate the various tropes and conventions found in the medium. An average episode runs as follows: Shaun introduces an anime, both of them watch it, then Remington gives his critiques and opinions of said anime. Depending on the anime, he may give a thorough, well thought out viewpoint discussing the pros and cons of the subject, or he'll go on a nigh hour tirade bashing and criticizing everything he believes to be wrong with the anime. Either way, it turns out to be very entertaining (especially for Shaun).

and their Patreon here

Some of the anime that they've covered can be found below

Anime Out of Context provides examples of the following tropes.