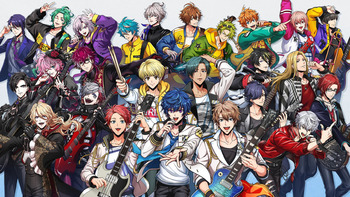 from ARGONAVIS (formerly known as ARGONAVIS from BanG Dream!) is a Japanese multimedia franchise created by Bushiroad, featuring all-male bands as central characters in the story.

The first and the main band of the franchise is Argonavis. They are composed of Ren Nanahoshi on vocals, Yuto Goryo on guitars, Wataru Matoba on bass, Banri Shiroishi on drums, and Rio Kikyo on keyboard. They attend a university at Hakodate, Hokkaido.

Argonavis had its first live event called “Argonavis 0-1st LIVE -The Beginning-” which revealed the first 3 seiyuu in their band before the last two “-The Beginning-“ lives introduced the final members.

It was announced on November 5th, 2019 that Argonavis would be receiving an anime series called ARGONAVIS from BanG Dream! ANIMATION that was released in April 10, 2020 and a Rhythm-Adventure game called ARGONAVIS from BanG Dream! AAside that was released on January 14, 2021. The game was shut down on January 31st, 2022 due to the franchise being retooled as a standalone franchise divorced from the BanG Dream! brand. A new mobile app under the rebrand is slated to be released sometime in the summer of 2023.