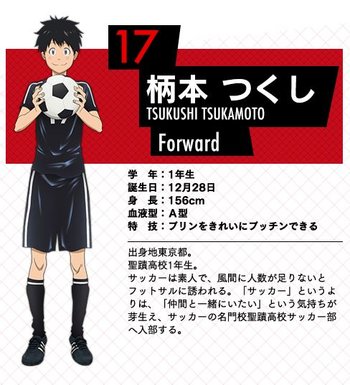 The Protagonist of the series, Tsukushi is a meek, friendly, very shy boy with no special talents except for his determination. He is looking for friends, and befriending Kazama is what gets him to join the Seiseki soccer club. 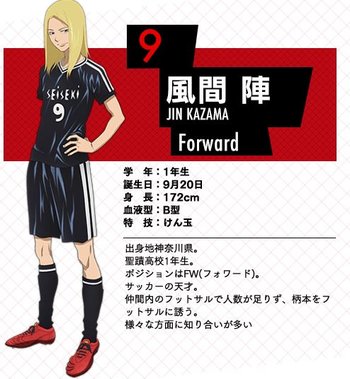 The series' deuteragonist and the guy who inspired Tsukushi to join the soccer team, Kazama is laidback, outgoing, and does whatever he wants. He is praised as a soccer genius. 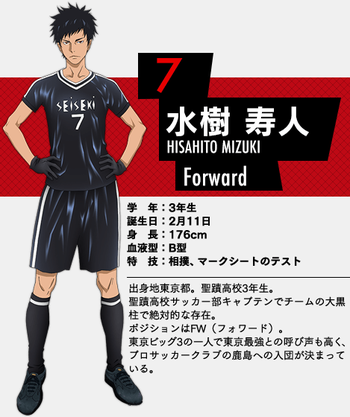 The Captain of Seiseki's soccer team, as well as the ace. Mizuki seems calm and reasonable but actually isn't very bright or good with words. He's on his way to becoming a professional player. 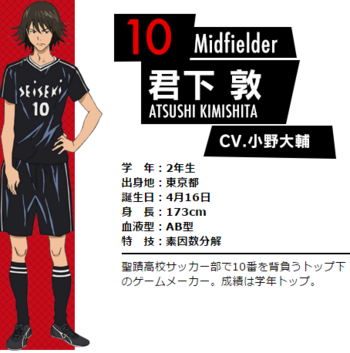 One of the second-years and a team regular, as well as the playmaker. Kimishita is grumpy, easily angered and always looks some degree of annoyed, but is actually a decent person. 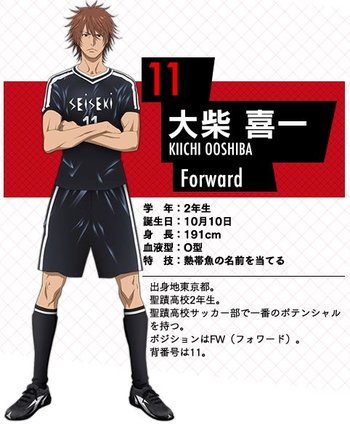 Also a second year, Ooshiba is a forward like Tsukushi and his rival for that position. He has a lot of potential, but is also hot-tempered, childish and irresponsible. 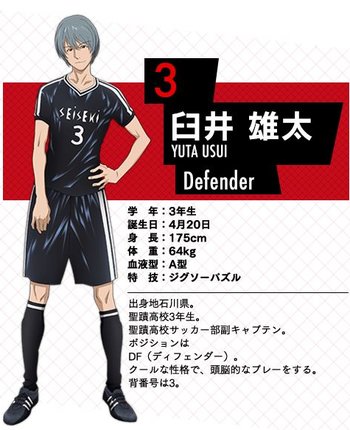 A third-year defender, Usui is the vice captain and Mizuki's best friend. He is gentle and good with words, often speaking for Mizuki and taking on the role of the team's mom friend. 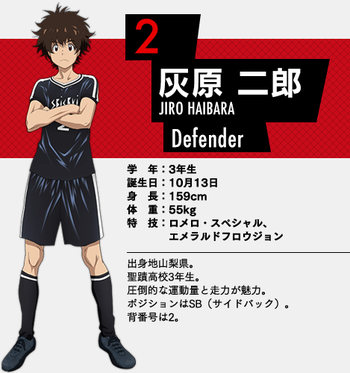 Another third-year, Haibara is a defender and team regular and the second shortest player on the team. He is energetic and usually a cheerful guy, but he's also serious and responsible when he has to be. 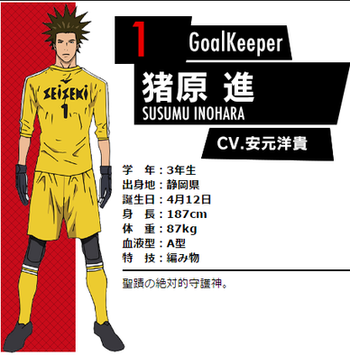 A third-year and Seiseki's main goalkeeper, Inohara may look intimidating but is actually a very kind soul. He and Haibara are rarely seen apart from each other.

A first-year midfielder and part of Tsukushi and Kazama's friend group. He's loud-mouthed, a bit brash and rough around the edges, but at the core he's a very nice guy.

Also a first-year and part of Tsukushi and Kazama's squad. He's generally serious and hard-working almost to a fault, except when it comes to school grades, as well as somewhat unlucky.

A first-year goalkeeper and also part of Tsukushi and Kazama's squad. He's quiet, shy and good-natured and tends to stay out of the other first-years' nonsense.

A pair of second-year midfielders. Not much is known about them, except that they usually appear as a duo.

A third-year left-winger and the fastest left-footed dribbler on the team. Fairly little is known about him, except that he's fairly hot-headed and snarky.

Also a third-year and a left-winger like Hayase. The two are close friends, but aside from that even less is known about him than about Hayase.

A kind-hearted third-year who's never been on the lineup in any official matches. He has to leave the school after the Inter-High, and Tsukushi helps him try and make the lineup so he can play with everyone at least once. 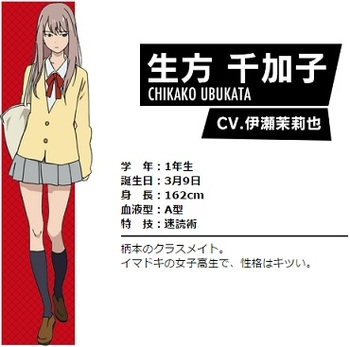 A first-year and Tsukushi and Kazama's classmate, Ubukata signs up to become the soccer club's manager after getting inspired by Tsukushi. She's both smart and tough (and short-tempered and bossy) and slowly grows to care about the whole team, although she has trouble showing it.

Seiseki's coach. He's a stoic person who usually seems tired and a little detached, but he's also a highly skilled coach who knows how to make his players grow and improve. 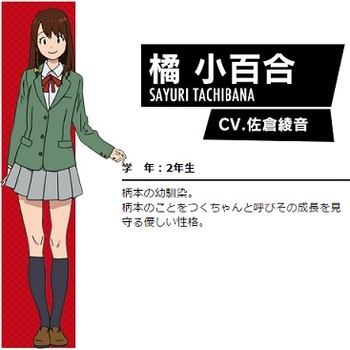 Tsukushi's childhood friend and a second-year at Seiseki. Sweet and caring, she's been looking after Tsukushi since they were little, with the latter viewing her as an older sister.

Ooshiba's older sister, a Seiseki third-year. She is smarter and more serious and reasonable than her brother, but even so (or maybe because of that) they seem to get along okay.

The Ace and captain of Saku High, Indou is a third-year and a feared midfielder gifted with inane talent. Scary as he can be on the field, Indou is also emotional and even has a silly side. He views Mizuki as his rival.

A forward and feared as the top scorer of Saku High, Narukami is also a third-year (even if he doesn't look it). He is shown to be very selfish and even cruel on the field, but he also has a playful side. He and Indou are inseparable. 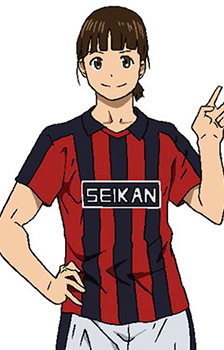 Seikan's midfielder and captain. He's widely known to be on national level and already has a pro contract, just like Mizuki, who will be his teammate. He's friendly in his demeanor, although somewhat devious.

Seikan's forward and genius first-year. He's a hot-blooded showoff and Kazama's rival in the Seiseki vs Seikan match. 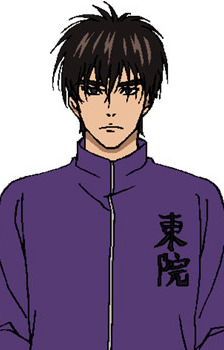 Touin's captain and strongest player, strong enough to be considered one of Tokyo's Big Three. He's a very serious and dedicated person, as well as polite and gentlemanlike.

Touin's pinch ace, a player who only gets subbed in during overtime unless a situation of need arises. Light-hearted, friendly and easygoing, he has been Hoshina's companion for a long time.

Ichiboshi's ace and, so far, the only current second-year to already have a pro contract. He looks a little intimidating, but is actually pretty friendly, as well as a prankster.

A third-year at Ichiboshi and very good at freestyling. He seems a little rude and irritable but isn't unfriendly, except to Aiba, who constantly succeeds at driving him up the wall.

Ichiboshi's genius first-year forward, a cheery but smug and overconfident kid even in matters that have nothing to do with soccer. He can be nice to his opponents if he respects them though.

Tsukushi's single mother. She's as kind, caring and emotional as her son and largely raised him by herself. She works at a daycare and is bound to a wheelchair for as-yet unknown reasons.

Narukami's older sister by two years, a Saku High alumna and former manager of the Saku High soccer club. A kind, smart, mature young woman who is keeping her brother and his live-in best friend in check.

Kimishita's father and owner of a sports equipment store. He's a good-natured, friendly man who cares a lot about his son; Kimishita got his love of soccer from him.

Kazama's younger sister, a quiet, mature middle school girl. Since she and her mother left when Kazama was a child, she hasn't seen her brother in years.