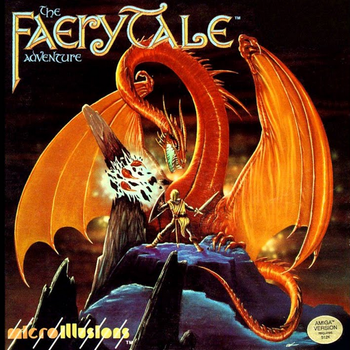 The Faery Tale Adventure is a classic Role-Playing Game released in 1987 by MicroIllusions.
Advertisement:

The story is simple: An evil necromancer stole a magical talisman from the village of Tambry, and three brothers, Julian, Phillip, and Kevin, set out to retrieve it. Along the way, they Save the Princess, help a giant sea turtle, and kill a Wicked Witch, before finally confronting the necromancer in his lair. In a unique twist, you only ever control one brother at a time, but should he perish, the next oldest sibling takes up his sword to complete The Quest.

The game was ported to the Sega Genesis by New World Computing a few years later, and ultimately received a sequel, Halls of the Dead: Faery Tale Adventure II, by The Dreamers Guild in 1997.