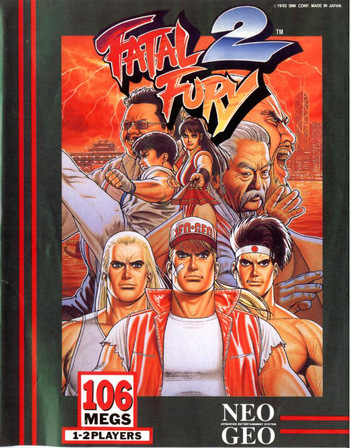 Fatal Fury 2 is the sequel to Fatal Fury: King of Fighters, and the second installment of the Fatal Fury series. The game was released on December 10th, 1992 for Arcades and the Neo Geo.

Picking up a year after the events of the first game, a new King of Fighters tournament has been announced, this time held by a mysterious new sponsor. The tournament now spans internationally, with fighters from around the world competing to be the best.

The game refines the mechanics introduced in the previous installment, this time offering a full four-button moveset consisting of two punches and two kicks. The lane system has been redesigned so that players can now knock each other into different lanes, as well as new stage hazards like electric fences or bull stampedes. Another big addition is giving every fighter a unique "Desperation Move", a powerful move that's accessible only at low health.

A year later, SNK released Fatal Fury Special, an updated version of the game with additional characters and features.

The roster consists of: