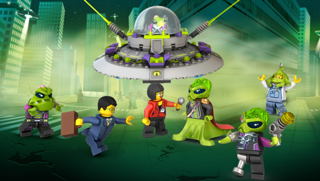 LEGO Alien Conquest is a 2011 LEGO Science Fiction theme, and the immediate successor to LEGO Space Police. Throwing back to 1950s/1960s science fiction, it's about an Alien Invasion of Earth and the efforts of the Alien Defense Unit to repel the invasion. Compared to the other LEGO Space lines, it's much more lighthearted, goofy, and doesn't take itself at all seriously. It was followed by the Galaxy Squad line.

Tropes present in the line and its support material: