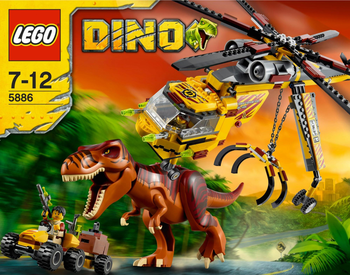 LEGO Dino is a 2012 LEGO theme, built around the idea of a troop of experienced dino hunters capturing prehistoric animals. It is very similar to the earlier LEGO Dino Attack line, especially with regards to the dinosaur figures, although the setting here is more grounded in reality, at least in that the dinosaurs aren't monstrous mutants, and the gear used by the human characters are far less fancy and sci-fi-ish.
Advertisement:

The story is as simple as it gets: The dinosaurs "are loose" and about to attack "the city", so "the heroes" have to capture and sedate them. The dinos reside at "the nest", while the heroes live at "the base".

A total of seven sets were released. Although they still utilize the kind of construction that made the Dino Attack ones so unwelcome andand sadly suffer from several anatomical inaccuracies, the dinosaur figures are by far the best dino sculpts LEGO has released so far.

While some criticized the sets for putting too big an emphasis on these dinosaurs, making the vehicles and buildings look plain and underwhelming in comparison, the reception of the line wasn't at all bad, and the similarities between the setting and the popular Jurassic Park franchise didn't go unnoticed either, turning the line into a sort of "JP stand-in" in the eyes of many collectors; given that the Jurassic Park license was held by KRE-O at the time, this may have been LEGO's way of Building Around Trademarks.