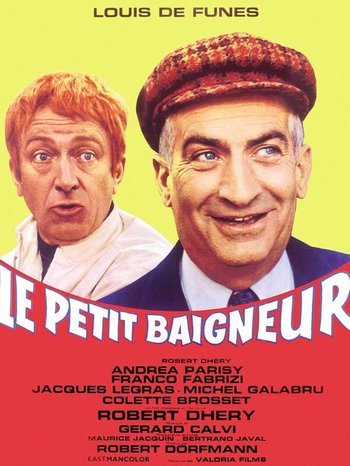 My Louis Lies over the Ocean
"Is this a joke???"
— Louis-Philippe Fourchaume (when he learns the Little Bather is a revolutionary sailing ship and he has just fired his inventor...)

André Castagnier wins a sailing race in San Remo with a boat that he designed, The Little Bather. He comes back to France, where his boss, Louis-Philippe Fourchaume (De Funès) fires him, because the hull of another boat designed by him broke during her naming ceremony. Mr. Fourchaume then hears that The Little Bather has received an award and that many customers want to buy her. So, he decides to hire André Castagnier back and he goes to André's native village, where he meets André's brothers Henri and Jean-Baptiste, his sister Charlotte and his brother-in-law Scipion (Michel Galabru).

The Little Bather provides examples of: