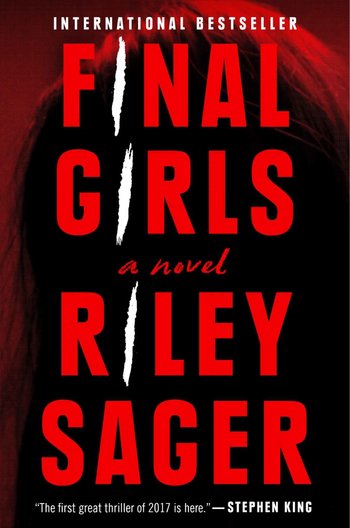 Surviving is not living.
Advertisement:

“The first great thriller of 2017 is here: Final Girls, by Riley Sager. If you liked Gone Girl, you’ll like this.”

Final Girls by Riley Sager is a 2017 Horror Thriller novel. It is a Deconstruction of slasher movies that follows up on the long-term effects of surviving a massacre like so many young women in horror movies do.

Ten years ago, Quincy Carpenter was a college student who survived a real life horror movie when an escaped mental patient murdered her best friends while she was on a camping trip. A nervous wreck who runs a baking vlog, she struggles to maintain a Stepford Smiler facade. Her only friends are boyfriend Jeff and police officer Coop. She is one of the three "Final Girls" that have survived similar experiences with psychotic killers — beautiful, tragic, and newsworthy.

When Lisa, the only one Quincy had any contact with, suddenly commits suicide, Quincy finds herself contacted by the other Final Girl. Samantha attempts to force herself into Quincy's life and pressure her into unleashing her long repressed violent side. She also asks uncomfortable questions that force Quincy to confront her amnesia about the night that made her famous.

What did happen that night?