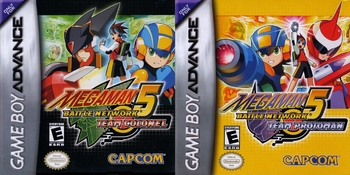 A new crime syndicate working for Dr. Regal called Nebula has taken over the internet and stolen everyone's Navis. Lan and MegaMan.EXE must work together to stop these new enemies, along with their team of allies, which differs depending on the version. Team Colonel focuses on a new character named Baryl and his NetNavi Colonel.EXE, while Team ProtoMan focuses on familiar faces Chaud and ProtoMan.EXE.

One of the main features of Battle Network 5 are the Liberation Missions. These missions require the player to control multiple Navis —not just Mega Man — to clear maps in a similar fashion to turn-based Tactical RPGs. Liberation Missions also require all combat encounters to be completed in just 3 rounds, adding more pressure on the player.