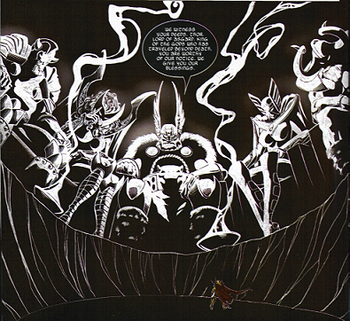 Thor, God of Thunder,note The little guy at the bottom. meet YOUR gods.
"You may be a god, but I am a Titan!"
— Kronika, Mortal Kombat 11
Advertisement:

While gods are usually the most powerful forces or entities in a given setting, this isn't always the case. Sometimes, there are beings out there that are so powerful, they are considered to be even greater than the gods. They may represent Big-G God or his greatest servants in comparison to a Fantasy Pantheon of little-g gods, be Anthropomorphic Personifications of eternal concepts, or even abstractions of forces far too powerful for mortals to wrap their heads around. In other cases, they're even Eldritch Abominations. These sorts of beings usually don't interact much with our level of reality, though there are exceptions. In fact, some sufficiently powerful mortals can fit this trope as well.

Compare and contrast The Old Gods, the forerunners to the gods, however they don't necessarily have to be stronger than the gods and can still be classified as gods. The "God of Gods" archetype of Top God might count assuming they aren't an official deity themselves. If the gods themselves aren’t considered cosmic entities, this figure probably still will be.

After collecting the energy of all the mortals on the planet, Trunks defeats the genocidal god Zamasu.

After collecting the energy of all the mortals on the planet, Trunks defeats the genocidal god Zamasu.