Webcomic / The Monster & The Girl 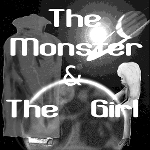 "Habits of millennia are most reluctant to be broken."
Advertisement:

The Monster & The Girl

was an ongoing weekly webcomic hosted on Comic Dish that updated on Mondays but appears to have suffered Schedule Slip as there have been no new pages recently. The Webcomic is described as an experimental OEL manga by the author-creator who lives in Japan. A Japanese version is promised at an undefined future date. Each chapter tells of one of the adventures of an immortal 'techno-magical' Cyborg and a mysterious woman that he's vowed to protect, in every life time that he finds her. The stories are set in the same fictional universe, but aren't in chronological order. TM&TG was originally planned as a series of novels. Artwork is Deliberately Monochrome, with an intentionally limited palette of 4 shades of gray plus black and white, except for rare panels of higher detail and finer shading.

The Monster & The Girl provides examples of: