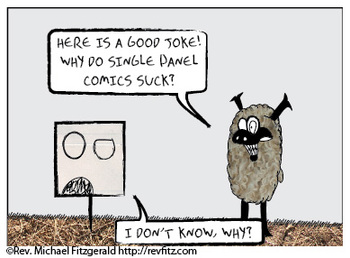 This is not an excerpt.
Mr. Square

is a Black Comedy Dada Comic by Rev. Michael Fitzgerald (creator of Kick the Football, Chuck. and Existential Terror and Breakfast

). It stars the titular character "Mr. Square", a clinically depressed doodle and a pathologically enthusiastic sheep as they make their way through a terrifying, existential, and often inconsistent landscape. According to its disclaimer the comics are "...not proof read, and may have been created outside of sobriety" and that "the artist has little recollection of what they are about".