To Hell with This Infernal Job 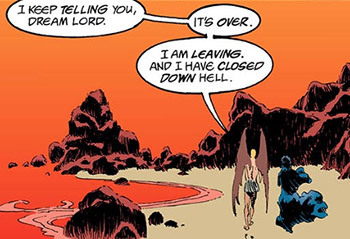 "And I don't get paid until the end of my job, which is... eternity."
"In the beginning...
The angel Lucifer was cast out of Heaven and condemned to rule Hell for all eternity.
Until he decided to take a vacation..."
— Lucifer (2016)
Advertisement:

The Devil calls it quits.

Why? Sometimes Being Evil Sucks. Being the Lord of Hell comes with some perks (a big palace, demons to order around, no one throwing you into lakes of fire etc.), but when you get right down to it, you're still in Hell. Everyone around you is either a demon or a damned soul, and either way odds are they're complete Jerkasses.

Your 'loyal' minions are constantly scheming against you, and often the only thing that keeps you afloat is that they're all scheming against each other too. You do nothing all day but dish out torment and punishment, all according to a set of rules laid down by the very entity you initially rebelled against (usually). The job sucks, the working conditions suck, and after enough millennia, you might just up and leave.

In many versions, Satan is actually stuck in Hell, but if the plot uncovers some Phlebotinum that gives him a way out, he'll be gone in a flash. In many stories where this plot occurs, the outgoing Devil tries to stick the protagonist with the post, but sometimes he just up and leaves the place to its own devices.

According to (some) actual Christian theology, the Devil is stuck in Hell (it's his punishment as well as everyone else's) and is (mostly) not able to leave. But these matters are always reinterpreted by contemporary culture. Settings in which the Devil is able to just vacate Hell tend to see him as an Anti-God of similar stature to God and opposed to him, so that his leaving upsets the Balance Between Good and Evil.

Despite the fact that it may sound like a Sophisticated as Hell version of the latter, this trope is not related to Take This Job and Shove It. However, that trope may very well describe ol' Scratch's sentiments when he performs this trope.

Compare Death Takes a Holiday, when they're only on a temporary leave, and Hell Has New Management, for when someone else removes the Devil. Contrast Faustian Rebellion, for when someone who was given an infernal job by the Devil quits it. Compare and contrast Being God Is Hard, when God himself wants to call it quits.