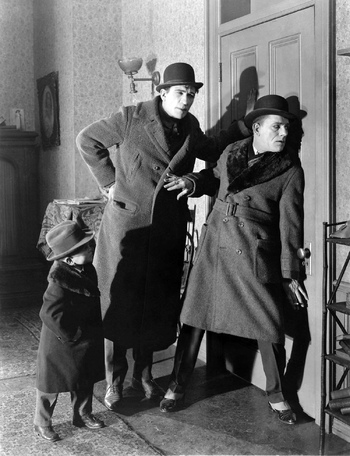 The Unholy Three is a silent crime film directed by Tod Browning and released in 1925. It was based on a book of the same name by Tod Robbins and starred Lon Chaney in the leading role. It was such a hit that it was remade as a talkie in 1930, directed by Jack Conway, with Lon Chaney once again in the lead role. The remake was Lon Chaney's first sound film, and, unfortunately, his only, as he died from throat cancer only weeks after the movie was complete. The two versions are almost identical to each other, except for the ending.

The story opens in a traveling carnival where a midget named Tweedledee (Harry Earles) a strongman named Hercules and a ventriloquist named Echo (Lon Chaney) are preforming their acts assisted by Rosie O'Grady, who picks the pockets of the rubes who see their shows. After the Midget starts a fight with a guest, Echo decides that they all should 'fade out' and aim for bigger prizes.

Cut to a corner pet store, headed by the darling Granny O'Grady, and her grandchildren, Herc, Rosie and baby Willie, and assisted by Hector. They sell parrots to guests and are about as adorable as can be. Until of course, they're alone. They are, of course, Echo, Hercules and Tweedledee, using the pet store as an excuse to get into rich people's homes before coming back at night to rob the place. Hector, their shop boy, has no idea of their secret identities and is falling in love with Rosie. One night, as they plan to rob a wealthy lady, Granny O'Grady notices Hector getting a little too friendly with Rosie and decides to stay home to keep and eye on them. Herc and the Midget rob the house as planned—but killing a man in the process. The Unholy Three, as they are now called, leave town, but not before planting the stolen necklace on Hector, framing him for the crime. Hector is arrested for murder, shortly after he asks Rosie to marry him, but she refuses, ashamed of herself.

The Unholy Three plan to let Hector take the fall, but Rosie, aware that Echo is in love with her, pleads with him to exonerate Hector by confirming his alibi of being with Granny the night of the robbery. In exchange, she promises herself to him. Echo agrees to the plan.

Meanwhile, Hecules offers Rosie a chance to take the loot and run off with him. Tweedledee overhears this and releases Echo's pet ape. Hercules strangles the Midget, and the ape kills Herc in return.

Here, the two versions differ. In the 1925 version, Echo goes to the trial and, by thowing his voice, makes Hector tell about the Unholy Three. Echo then confesses to being one of them, but with the actual perpetrators dead, he is let off the hook. He returns to his ventriloquist act, and Rosie shows up, true to her word. Echo, seeing Rosie loves Hector, lets her off as well, and the movie ends with Echo and his dummie bidding Rosie a sad goodbye.

In the 1930 version, 'Granny O'Grady' takes the stand in Hector's defense, but trips up and reveals herself as Echo. Echo is sentenced to one to five years in prison, and Rosie and Hector bid him farewell at the train station. Rosie, again, is true to her word and offers to wait for Echo, but once again, Echo releases her, realizing she loves Hector. The movie ends with him on the train to prison, and Lon Chaney smiling and waving at the camera while saying 'I'll send you a postal card.' If only he did.

Harry Earles, the little person probably best remembered for playing the lead in Freaks and a member of the Lollipop Guild in The Wizard of Oz, plays Tweedledee in both versions.

Tropes found in both versions: