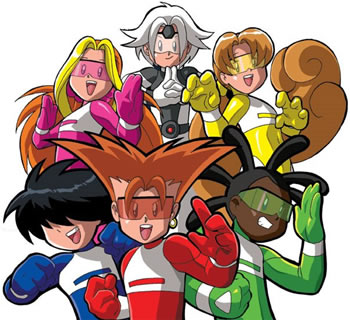 Combo Rangers started out as a webcomic written by Brazilian author Fábio Yabu (who also created the Sea Princesses series), first published in 1998 (thus being one of the genre's pioneers in Brazil). Initially an Affectionate Parody of Super Sentai and Toku in general (though no pop culture outlet was safe), Combo Rangers steadily grew to become its own thing, while keeping true to its influence and comedy roots.

The story starts in Cidade City (translated as Cityville back in the day), where five nine-year-old kids are drafted by a retired hero, the Mighty Combo, to fight the good fight against the invading aliens of the Deskarga Empire, led by the terrible General Pile and his army of monsters. As the children fight on, their bonds of friendship and sense of justice grow stronger, allowing them to defeat enemy after enemy and ultimately saving the world from destruction.

Months later, however, a new threat to mankind resurfaces in the form of Dr. Delirium and his elusive Master, who wish to use the people's fear for sinister purposes. Uncle Combo, as he's affectionately called by the kids, is then forced to bring the quintet (who had forgotten their adventures) back into action in the new phase of Combo Rangers, known as Combo Rangers Zero (1999-2000). New allies show up, enemies start presenting a bigger threat, and the heroes begin maturing with their new experiences.

By the third phase, Combo Rangers Revolution (2000-2001), the Rangers were living relatively peaceful lives as they entered their teenage years, when yet another threat looms from outer space, this time represented by Cardman, an evil wizard whose goal is to steal all the beauty on Earth. Eventually, however, the world is shaken by a series of natural disasters, spelling the Earth's impending Collapse... of which, unfortunately, readers never got to know the conclusion thanks to the season being Left Hanging with 14 episodes.

The Combo Rangers' adventures were a huge hit amongst Brazilian Internet users, back in its emerging era in the country during the turn of the 21st Century; so much, in fact, that while Revolution was rolling, they even got their own comic series, published by JBC, which lasted 12 issues between 2001 and 2002 (as well as a three-issue miniseries based on the first three episodes of Revolution before that), each with their own self-contained story; a second series, published by Panini in 2003, was a little more mature (both in art and plot) and lasted 10 issues. Since then, the series lay pretty much dormant as Yabu shifted his focus to Sea Princesses and other personal projects, until he announced, late in 2012, a fundraising campaign for three brand-new Combo Rangers albums. The R$ 40,000 (about US $17,000 at the time) goal was met in just two weeks, which goes to show how fond are the memories of the Brazilian Net surfers who followed the Rangers more than ten years before. The first of these albums, We Are Heroes, was released in the 16th Rio de Janeiro Biennial Book Festival, in September 2013, with the other two (We Are Humans and We Are Equals) coming out in the following years. The graphic novel trilogy and most of the print comics have been released digitally as well. The first graphic novel has been released in English through iTunes and Comixology, and is also available for free on Webtoon

, with plans to release the other two there as well.

More details on the albums, and the series in general, can be found here,