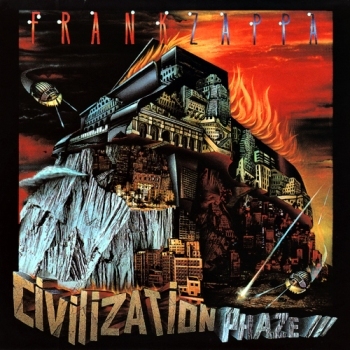 "Listening to it, it feels like Frank was trying to cram as many musical ideas as possible, one after the other, into this piece. It's very thick and dense and overpowering as a listening experience. Even if you think you know Frank Zappa's music, I don't think anybody could be sufficiently prepared for the powerhouse that this thing represents. This music should finally get Zappa taken truly seriously as a composer."
— Matt Groening
Advertisement:

Civilization Phaze III is the 36th and final album by Frank Zappa, posthumously released on Halloween 1994. Much like Lumpy Gravy (1968), to which Civilization is a sequel, the album switches back and forth between instrumental music and dialogues between people. The storyline, like that of Lumpy Gravy, follows a group of people living inside a piano talking about the outside world. The dialogue was mostly recorded during the same sessions as the Lumpy Gravy dialogue (some additional dialogue was recorded in 1991) and even contains some of the same portions. The main musical difference between the albums are that the music here is (mostly) performed on Synclavier here and tends to be longer than the musical intermezzos on "Lumpy Gravy".

Sadly, Zappa passed away before the album's completion, having spent the final years of his life putting it together. It was released ten months after his death, solely as a mail order album. It is seen as one of his best works, a crowning achievement in his entire career, and a perfect Grand Finale for one of the most influential and prolific avant-garde musicians of the 20th century.