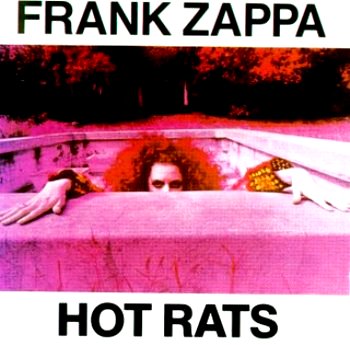 A movie for your ears...
"The very idea! An all-instrumental album, except for one vocal cut — and that had to feature Captain Beefheart! He's no singer! Why are you wasting America's precious time with this, you asshole!"
— Frank Zappa, sarcastically looking back at the bad reception of Hot Rats at the time in the USA, in his autobiography The Real Frank Zappa Book (1989)
Advertisement:

Hot Rats (1969) is a mostly instrumental music album by Frank Zappa. It was Zappa's second official solo album after Lumpy Gravy (1968) and was the first to be released after disbanding his original Mothers of Invention band. Ian Underwood was the only former member of the Mothers to appear on this album. The inclusion of Captain Beefheart was a guest spot happening around the same time when Zappa produced Beefheart's album Trout Mask Replica (1969).

Hot Rats is widely praised as one of Zappa's best albums and is generally his most well beloved record for people who aren't really fans of his work. The total absence of many of Zappa's trademarks (political and social satire, comedy, bawdy jokes, sudden experimental interruptions,...) may well explain its popularity. There's only one track with lyrics, "Willie The Pimp", sang by Captain Beefheart, and even his voice disappears after the first two minutes. Back then it flopped in the USA, but it was a top ten hit record in England and the Netherlands. Musically Hot Rats is sometimes categorized as jazz and indeed has elements of this genre. Its most popular track is "Peaches En Regalia", which became a regular concert favorite.

The album is also the first part of what could be called Zappa's Jazz Fusion trilogy, along with Waka/Jawaka and The Grand Wazoo (both from 1972).