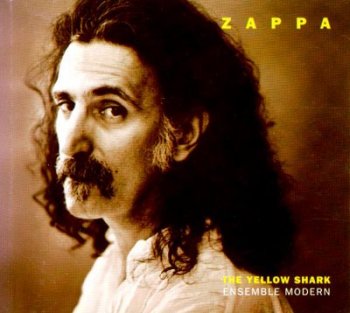 Now let's get serious, ladies and gentlemen. I know you came here for really FINE performances by a really FINE modern music ensemble, conducted by a really FINE conductor.
"It is his last major work. The ensemble is awe-inspiring. It is a rich pageant of texture in colour. It's the clarity of his perfect madness, and mastery. Frank governs with Elmore James on his left and Stravinsky on his right. Frank reigns and rules with the strangest tools."
— Tom Waits, who placed "The Yellow Shark" on the 13th place in his personal list of Top 20 favorite albums of all time, published in "The Guardian" in 2006.
Advertisement:

The Yellow Shark is a 1993 Classical Music Live Album by Frank Zappa, generally seen as the crown on his career. The album is a collaboration with the German Ensemble Modern, a classical orchestra specialized in performing more modern Avant-garde Music. It wasn't Zappa's first experience with a classical orchestra: Lumpy Gravy (1968) and 200 Motels (1971) already had orchestral pieces on them and albums like Orchestral Favorites (1979), London Symphony Orchestra (1983/1987) and The Perfect Stranger (1984) were even entirely classical music. Never before, however, had an orchestra been so entirely devoted to rehearsing and performing Zappa's music according to his personal wishes. The orchestra was even able to perform "G-Spot Tornado", a track off of Jazz from Hell that Zappa had previously assumed to be unplayable by human musicians (the studio version was composed entirely on a Synclavier).

For Zappa, this was the most satisfying performance his work ever received, being the closest approximation of how his compositions sounded in his head, and it all happened one year before his untimely death from cancer (which limited him to appearing for only a small number of songs on the album). It would also be the last album released while he was still alive; given everything already described, it ended up being a sadly fitting album to close out his life on. Even for the Ensemble Modern, it was the first time a classically trained orchestra performed music in a manner similar to a large-scale rock concert.

The concert was named after a piece of Fan Art that Zappa had received in 1988: a yellow surfboard carved and modified in the shape of a shark.

Trope Gathering In A Post-Industrial Environment.