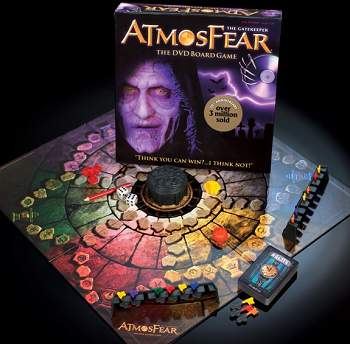 For 3-6 keymasters.
TURN THE VOLUME UP
AND THE LIGHTS DOWN
Advertisement:

Atmosfear (also originally known as Nightmare in Australia, the game's country of origin, and America) was a horror-themed board game developed and released in 1991 by Australian-based A Couple 'A Cowboys, and followed players as they attempted to confront their greatest fears while taking on challenging odds and a creepy host.

The main objective of the game is to collect six special keys, called Keystones, in various provinces across the six sections of the game board (referred to as "The Other Side"), then return to their starting spot. Once there, the player opens up a jar in the center of the board that houses all of their fearsnote Or in the Harbingers Soul Rangers expansion, what most disgusts them (written on slips of paper before the game begins). If the player chooses another person's fear, they beat the game. However, there is a time limit working against the players, via a videotape (later DVD) with a countdown clock that runs while players take turns.

Their progress can be alternately aided or hindered by The Gatekeeper, a hooded being who will often interrupt the game and give various conditions (which are sometimes helpful, but mostly harmful) to one or all of the players. If none of the players win the game before the time limit of the gametape elapses, The Gatekeeper wins.

Several expansions and sequels were produced for the series:

The Spoony Experiment reviewed several games in the series, the original Nightmare

and the "expansions" to Nightmare, along with Atmosfear: The Harbingers.

It's also been played

on Board James. The AFK show on LoadingReadyRun Streams has also played the series extensively, covering the original

and multiple attempts at the DVD edition of Atmosfear, most of which were aborted due to technical issues.

STOP! Whose turn is it? Answer! (Yes, my Gatekeeper!) Read these tropes: