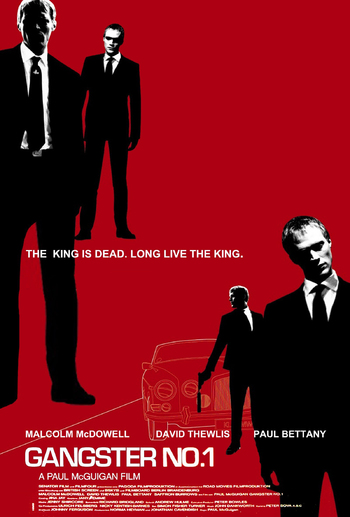 Make us a cup of tea.
"I’m number one. Number fucking one."
— Gangster
Advertisement:

Gangster No.1 is a film about the rise to power of the unnamed boss of London’s gangland as told by the man himself; Gangster. It stars Paul Bettany as Young Gangster, Malcolm McDowell as Old Gangster, David Thewlis, Saffron Burrows, and Kenneth Cranham.

The film begins at a boxing event at the table of several old London Gangsters drinking champagne, smoking cigars and swapping stories. The mention of the pending release of Gangster’s old boss and mentor, Freddy Mays, sparks dark and long-suppressed emotions and memories for Gangster. The focus shifts to the 1960s when Gangster was recruited by Freddy and the moulding of Gangster into a sharp dressed man and feared enforcer. This being gangland London, friction with rival gangs isn’t far away and when Gangster learns that Freddy is to be targeted by another firm led by Lenny Taylor note played by Jamie Foreman whose father was real-life gangster Freddie Foreman, he happily lets it play out so he can assume control of Freddy’s crew. After the “hit” on Freddy and his fiancé, Karen, has been carried out, Gangster brutally tortures Lenny in Lenny’s flat before throwing him head-first through a drinks cabinet.

Freddy and his fiancé somehow survive the attempt on their lives, but Freddy is wrongfully convicted of Lenny’s murder and sent down for 30 years. This leaves the Mays gang without a leader and Gangster assumes the throne. The years flash by with Gangster and his men taking control of London’s crime scene, staging heists, fixing horse races and opening a casino.

Back in the present day, Gangster learns that Freddy and Karen are to be married, seeks out Karen and demands that Freddy come and see him.