Literature / Rainbow Dash and the Daring Do Double Dare 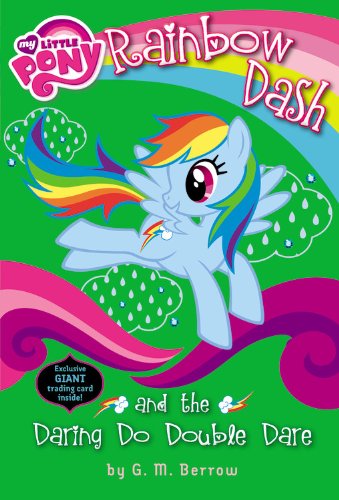 "Rainbow Dash is a huge fan of the Daring Do book series, but after the newest book comes out, she's not alone! Suddenly, every pony in Ponyville is reading the books! To prove she's the ultimate fan, Rainbow Dash decides to show her friends that she can be just as brave and "daring" as her hero. But Twilight Sparkle and Rainbow's other friends worry about how far she's willing to go. Just how daring should one pony be?"
Advertisement:

The third note excluding an Equestria Girls novelization officially licensed My Little Pony: Friendship Is Magic chapter book of a series of books by G. M. Berrow, and part of the overall My Little Pony (Generation 4) universe. Just like the previous two books, this also takes place some time after season threenote With one line in particular suggesting that it takes place in the middle of season 4. See Continuity Nod below. This book focuses on Rainbow Dash's do-anything nature as well as the conflict between her go-it-alone nature and her friends' offers of support.