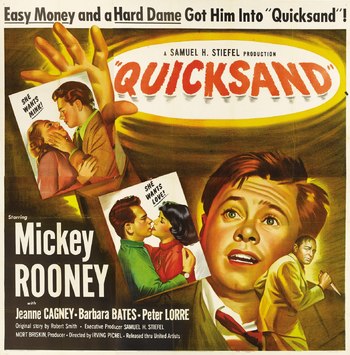 Quicksand is a 1950 American film noir that stars Mickey Rooney and Peter Lorre and portrays a garage mechanic's descent into crime. The film provided Rooney with an opportunity to play against type, performing in a role starkly different from his earlier role as the innocent "nice guy" in MGM's popular Andy Hardy film series.

Motor mechanic Dan Brady lacks funds for a heavy date with new restaurant cashier Vera, the type whose life's ambition is a mink coat; so he embezzles twenty dollars from his employer with plans to repay it the next day. To make up the shortage, he goes in debt for a hundred. Thereafter, every means he tries to get out of trouble only gets him deeper into financial difficulties that lead to bigger crimes as everyone he meets is out for themselves.